In aid of St. Barnabas Hospice

St Barnabas Hospice, a local charity, organised a day out for him with manager Danny Cowley and the players at Sincil Bank last September when the club played MK Dons. Tim led the team out and had an amazing day. In his words "I was like a kid in a sweet shop".

For those that knew Tim, no-one would be surprised at the answer as he always put others before himself. He simply asked that his friends raise some money for St Barnabas Hospice so that others might have the same great care that he recieved.

We, his friends, pledged to make this happen........ but where to start? Thankfully we know some absolutely fabulous people, and the cause was taken up by colleagues from Lincolnshire Community Health Services NHS Trust. We are all so very grateful to them in helping us execute Tim's wish.

Now watch Tim's video, where Tim will explain why St Barnabas has been so important for him and his family and along with Danny Cowley, why connecting people is so important for us all, including the players of Lincoln City Football Club! 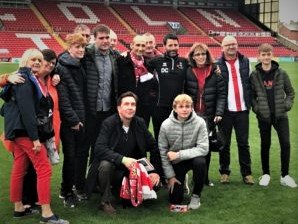 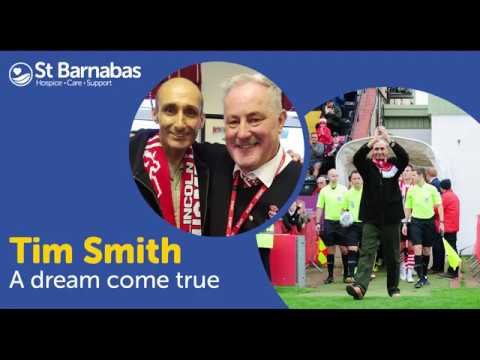 Programme for the Day

07:30 AM - 08:30 AM
LCHS Golf Society Committee Meeting and Congregation
Location: The Verandah Room

David and James will be arriving at around 07:30 to set up for the day. Committee will congregate in The Verandah Room for briefing and final day detailing liaising with Lincoln Golf Club officials.

Team captains and players are most welcome to arrive early- The LCHS Golf Society Committee would love to have a chat and a coffee with anyone before things get under way. If you do arrive early, please let us know and introduce yourselves- if we're not around, we'll be in the Verandah Room!

All team captains and players to assemble in the Club House for Bacon Roll Breakfast with Tea/Coffee being available. Vegetarian options are available- please do have a look at the menu board as you will be well catered for.

During Breakfast, team captains will need to register their players and collect a scorecard from the registration desk located in the Clubhouse. The LCHS committee members will point you in the right direction.

All captains, players and officials to report to the First Tee where a few words will be said to mark the occasion, in memory of Tim Smith.

At breakfast, your team captain will be notified of your tee time which will be between 10:02 and 12:02 at 10 minute intervals.

Whilst we understand that there might be a little waiting around, please do use this time to have a practice if you wish, there are some great practice facilities on offer at the club.

FIRST AID AND MEDICAL ASSISTANCE
For your assurance and comfort, during play (10:00-16:00), there will be First Aid and Medical Assistance on hand, kindly provided by Lincoln City FC Nurse Bev Gambles, RGN, assisted by her colleague Lauren. Bev and Lauren will be located in the Clubhouse, and will be able to attend to minor injury or illness, as well as provide response in the unlikely event of an emergency. A huge thank you to Bev and Lauren for providing this cover and we look forward to seeing you both afterwards in the 19th hole. Further details as to how to access Bev and Lauren will be given to team captains at registration.

The Buffet will be ready from between 14:30 and 15:00. Please do help yourselves as you leave the course and enjoy the afternoon and evening!

Our very own Mr Magic will be making an appearance for your entertainment. We think that you will all be amazed! So don't disappear too early!

We aim to have the scores calculated and verified by around 17:00, with the last group finishing their round at approximately 16:00 hrs. Please do bear with us!

We will also be running a raffle with some amazing prizes on the day- but we will keep you posted on this!

Although Danny is supporting this event and sends his best wishes, he has sadly moved on to manage Huddersfield Town in the Championship. With it being only his second week in charge of the Terriers he will not be attending. On behalf of all Imps fans we wish him every success and would like to thank both him and Nicky for creating some very special memories! We extend a warm Lincolnshire welcome to Michael Appleton as Danny's successor, who starts work at Sincil Bank this week. UTMI!

LCHS volunteers, under the stewardship of Katie and Angela, are kindly running a caddy for sale service for golfers for the day with all proceeds going to St Barnabas. It will cost £10 for the day for each caddy. We did try to get Bill Murray and Chevy Chase but they were more expensive and curiously had prior engagements.

A golfing magician? Surely not? Be amazed at the table magic, sleight of hand and illusions from Lincolnshire's very own Mr. Magic. Maybe he can make those double bogeys disappear from my scorecard?